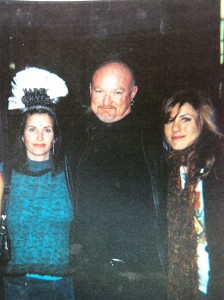 Driving with Arnold Schwarzenegger in a tank. Getting backstage at a rock concert. Spending an afternoon with a movie star. A spot on a popular sitcom.

What do these things have in common, besides sounding awesome? While they are all things that most of us imagine to be impossible, they are opportunities we are developing here at C4DR.

What is that? It is an organization inspired by my years of unique employment in two unique industries that, when combined, make for charity magic.

What industries? How does body guarding and disaster recovery work sound? Yes, they seem unrelated and mismatched, but my years in both of these fields has shown me a rare and unique way to really begin to help those suffering after a disaster.

Let’s just begin at the beginning…During Hurricane Katrina, billionaire business woman Oprah Winfrey flew into Houston and made a four hour appearance at the Houston Astrodome. Surrounded by cameras, she was filmed comforting and talking with Hurricane Katrina evacuees from New Orleans…and then she was gone. A lot of people felt she had snubbed the victims with her token visit, or that it was purely a publicity stunt…but they were wrong.

Her visit did something huge. It brought the cameras, and that means it brought attention and more donations and more celebrities. Oprah’s Angel Network brought people from the Oprah team as well as stars like Julia Roberts and Jamie Foxx.

Celebrities may seem like they have it easy, but they work almost all of the time. And yet they know that just making an appearance somewhere can do a lot of good. Think of the celebrities who have really helped to shine a spotlight on human suffering and human need in the wake of a disaster. Sean Penn in Haiti, New Orleans, and loads of other places. Brad Pitt and his Make it Right Foundation. And the long list of celebrities who make commercials for St. Jude’s Children’s Hospital…just to name a few. They may be wealthy, but they stop what they are doing, roll up their sleeves, and give as much time as they can to helping. Yes, it may end up just being four hours, but that four hours can equal millions of dollars in aid and relief.

When these people speak up for something, most of us pay attention…and then we give money to the charity those celebrities talk about. And I can tell you, the money helps. It makes a huge difference, and is often the reason people don’t just “make it through” a disaster but actually have the resources with which to start picking up the pieces and begin again.

How do I know these things? I have led a very interesting life for the past two decades and it has allowed me to cross paths with countless celebrities who have proven over and over again how much they care. These are people who haven’t forgotten where they came from. Sure, there are a lot of famous folks who don’t care enough to even think about disaster work, and then there are the big names who ask me what I do, and when I tell them they lean in closer and ask “How can I help?”

Why do the rich and famous ask me how they can help disaster victims? Well, when I am not working as a bodyguard, I am a full-blown FEMA inspector. For more than 25 years I am one of the people who heads into a disaster area once the President makes an official declaration.

I arrive and live in the exact same ways that victims live – with the exception that I didn’t just lose everything I owned! Sometimes there is only substandard housing split between a lot of people. No food, water, ice, power is par for the course, and lousy food can often make things even worse. However, I get to go to bed each night knowing that soon my work is done and I can return home. The people caught in the disaster have to find a way to start again. They don’t know when normal will reappear again of even when they can go home.

Now, I can already here you saying “If you are working with victims and providing government support, why should I support your charity?”

The answer is simple – in all my years, I have rarely seen the funding that victims receive provide them with everything needed to get on with their “normal” lives. In fact, I have seen that even emergency relief may not be enough. I know, much better than many others, just what disaster victims need in those first hours, days, weeks or even months. And I know the best ways to provide them with it effectively. You can’t just throw money at problems, you have to be on the ground, in the mix, and ready to live it.

It was all of this that inspired my charity C4DR or “Celebrities 4 Disaster Relief”. Using my many industry connections and knowledge of celebrities who remain true to their roots, my organization will bring opportunities to celebrities and allow them to contribute. It could be time, an appearance, or a personal visit similar to a the “Make a Wish” charities, and it will create attention and boost donations to some of the most worthwhile causes. As an example, let’s say Arnold Schwarzenegger would agree to that ride in the tank. This event would go into a raffle, and anyone who donated a specific amount would get their name in that raffle, plus a nice gift or two.

Interested in helping C4DR get off to an amazing start? Donate a $100 or more and you can start to spread the word wearing your C4DR shirt and hat. Plus you get to put your name into the pool of amazing raffles being created even as you read these lines.